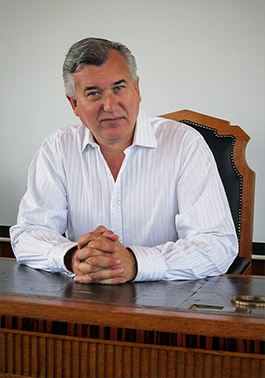 Here is an interview recorded by Michael Nolan of Nolan PR. In the interview, Michael delighted in the stories and anecdotes that Paul had to say, Michael commented at the end of the interview: ‘Paul, you truly have led an interesting career and I enjoyed listening to how you solved the numerous tasks that were presented to you.’

Add together years of experience at London’s premier hotels, a drive to succeed and a heightened sense of awareness of what the customer wants.

That’s the secret ingredient that has taken Paul Pugh to the top of the concierge world and now branching out with his own business Sincerely Paul.

And ingredients are something Paul should know about, being a qualified chef.

The cooking world’s loss was certainly the concierge world’s gain because it is clear upon meeting this personable man that Paul Pugh is not the sort of chap to be tucked away behind the scenes.

With the charm and poise of a matinee idol of yesteryear Paul recollects how he packed a suitcase in his Birmingham home for the adventure of London in 1985.

“My family had been in the catering business so it seemed the obvious career path to go down at that time,” says Paul. “However, I just felt I had attributes in other areas which weren’t being utilised in the kitchen.”

“I had a friend, who set me up with an interview at The Mountbatten in Covent Garden, and they offered me a job as a luggage porter and it just went from there.”

Paul rose to head concierge at the Mountbatten before taking the helm of the concierge desks at the Hampshire, Savoy and latterly the Dorchester.

“Obviously every new job brings new challenges but the most important points are to make sure whatever the customer wants I deliver and a little bit more,” adds Paul.

And just what does the customer ask for?

“Generally, I would say the most asked question has to be what the weather is going to be like today.”

However, it is safe to say there have been more unusual requests.

“It’s not unusual to be asked where the nearest Harrods is and a colleague of mine has been asked to find a bullet proof evening dress for one client,” he jokes.

As well as the funny there have also been touching moments, which Paul recalls.

“One, which happened not so long ago, was when a guest checked in with his goldfish. At the bottom of the bowl hidden underneath the pebbles was an engagement ring, which he gave to his girlfriend. I’m glad to say she said yes and is now his fiancée.”

Another memorable incident Paul recollects was when a non-resident who had a sweetheart back in 1985 made a promise as they both moved to different parts of the world that they would meet on Valentine’s Day in the year 2000 at the Savoy, 11am.

“The lady called me and said she won’t be able to make it as she is now married with two children but would like me to pass on a Valentine’s card to him. Armed with a full description of the man I eagerly awaited for him to arrive so I could pass on the card. Sadly he didn’t show up.”

With an estimated 4,000 requests each month, mainly about transportation, dining out and airline requests there are many others anecdotes that Paul could keep us entertained with for many a pleasant evening’s entertainment.

However as well as been a wit and raconteur Paul is a sincere professional dedicated to the concierge industry and the demands of the modern concierge has seen some considerable changes since that wide-eyed 20-year-old got off the train at Euston with his suitcase.

“Yes, the function of the concierge has expanded greatly,” Paul believes.

“As part of our folio we now arrange interpreters for overseas visitors, and chartering aeroplanes and arranging helicopter rides are now quite common.”

“One guest flew to Sardinia for the day, but many enjoy a trip to a historic castle for lunch.”

There are also celebrity guests who sometimes need the help of Paul Pugh at the most critical of moments.

“I remember Paul Simon was staying with us and was playing Hyde Park. We had a call from his personal assistant saying Mr Simon needed a manicure, as he cannot play his guitar.”

Yes, 20 years at the top of the concierge business has certainly provided Paul with countless memories. But touching shoulders with the stars and the downright bizarre tales do not do justice to what he has achieved, and what he will undoubtedly achieve with Sincerely Paul.

“I suppose the story that warms my heart and makes me feel what I do can make a difference is one about a charming couple who stay at the Savoy each year.”

“One year sir brought a baseball cap with him and he gave it to me. Embroidered on the cap were the words ‘Never underestimate the power of the concierge.’ This is apparently what I had told him the previous year. I still have the cap and wear it whenever I get the opportunity.”

It was a fitting way to end our interview and most of all epitomised what this man is- Sincere!